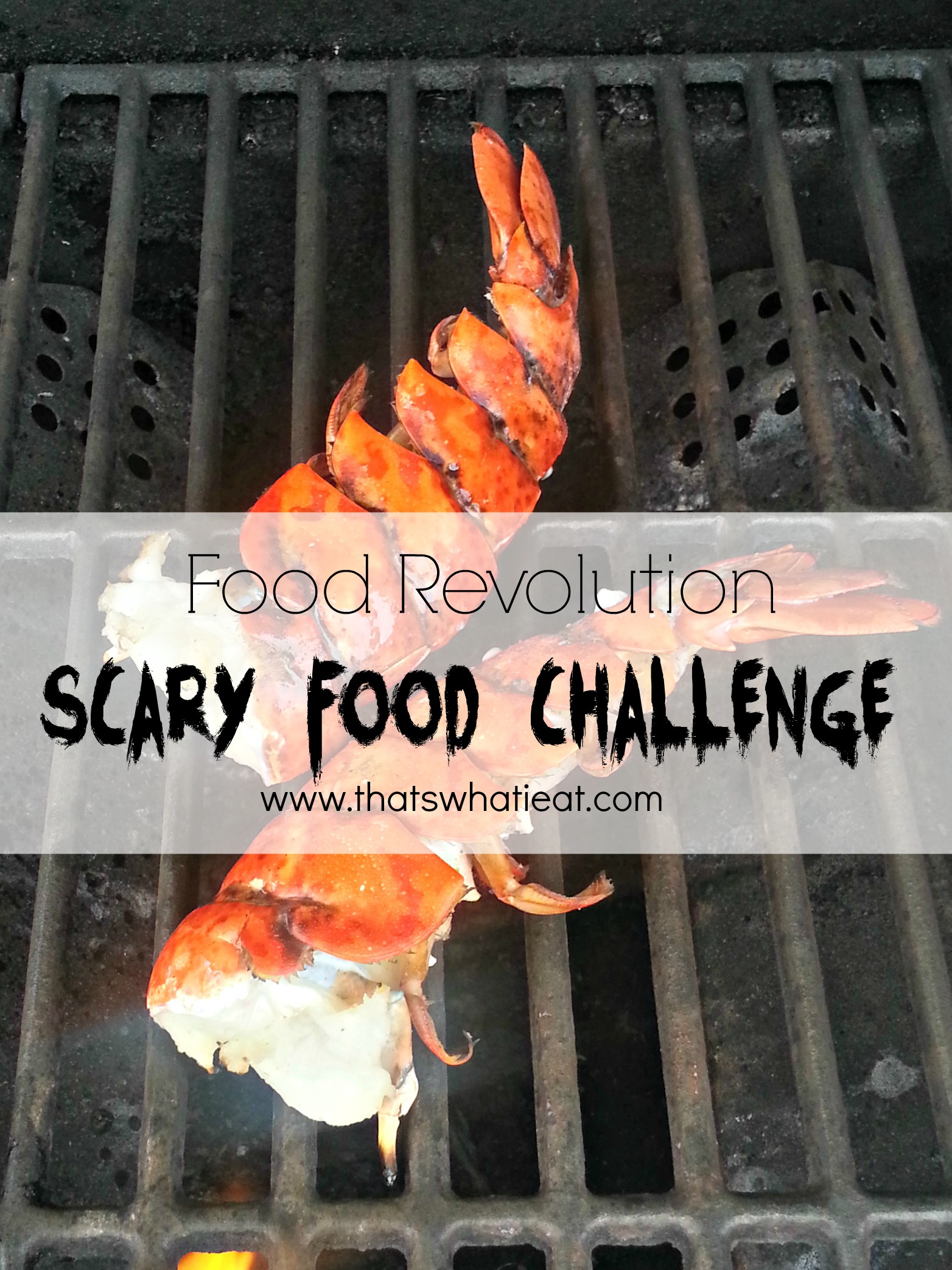 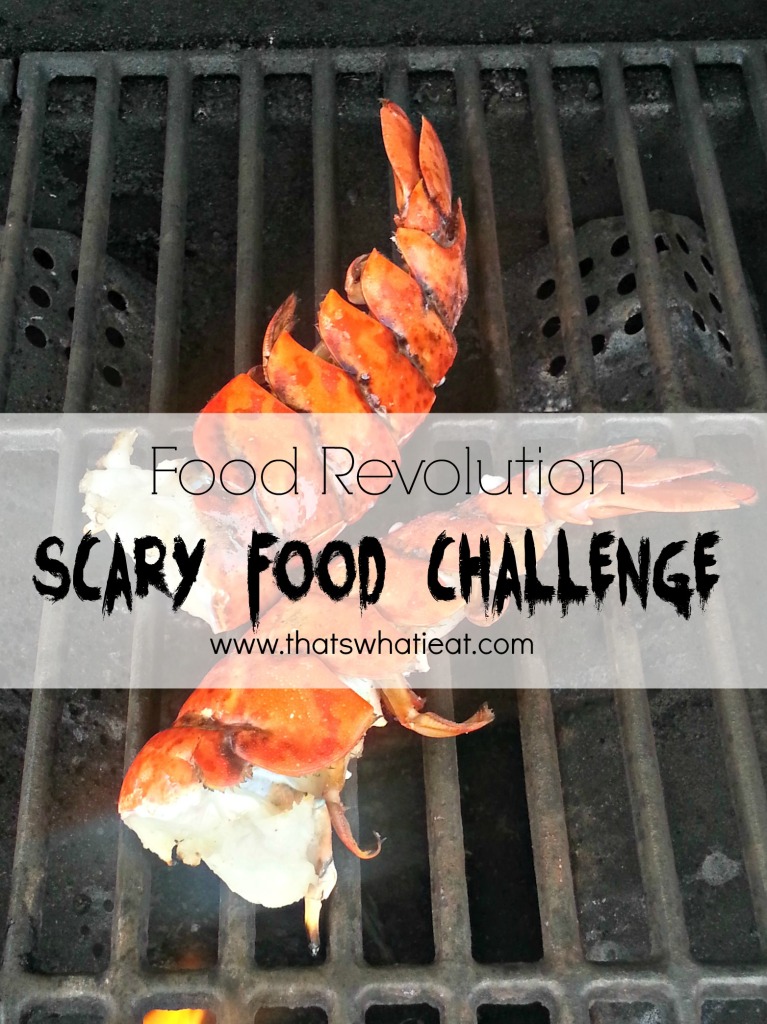 Last month I announced that I am now a Food Revolution Ambassador (I’m still so excited about this!) and I briefly mentioned the first of the monthly challenges. They send out a couple of different challenges each month, but the one I chose was to scare myself in the kitchen. That could mean trying a new recipe that was intimidating, or a new cooking technique. The problem is, as I was trying to think of what we could do, I couldn’t think of anything that scared me. I finally asked the folks on my Facebook page (follow my Facebook page so you can help answer my random questions!) and someone suggested lobster. And you know what? I had to agree that there isn’t much that is as scary looking as a live lobster.

Make sure to read about November’s challenge below!

But live lobster? That stuff is pretty hard to find in the middle of Utah in October. We decided that we would try to track down some lobster tails instead, because for me that is adventurous enough. I love seafood, but I have a small problem with eating an animal that is still looking back at me, and while lobster tails don’t exactly have eyes, it still looks enough like the original critter that it makes me a bit uncomfortable.

With that plan in mind, we headed off to the store, when to our surprise we were greeted in the front of the store by an employee holding a live lobster, offering to let our girls give it a pet. Apparently we decided to do our scary food day right in the middle of the seafood extravaganza. Perfect!

I thought about that lobster for a really long time. The employee set him down on a bed of ice, and I went over and looked him right in the eyes. At least, I think those were his eyes. I thought about dropping him, alive, into a pot of boiling water. It made me a little ssqueamish but I got past it. I looked at all the icky spiny things up and down his tail, and I decided that this challenge is all about facing your fears, so I would deal with those. “You’re going to be my dinner,” I thought to the lobster. In response, that lobster wiggled the teeny little arms or legs or tentacles or whatever those things are near it’s mouth. And then I agreed with him that no, he wasn’t going to be my dinner, and we grabbed some lobster tails to go. We have also been wanting to try oysters but have been a little intimidated, and since it was only a couple of bucks each for some gigantic grilling oysters, we grabbed a couple of those.

And then we went home and threw everything on the grill. 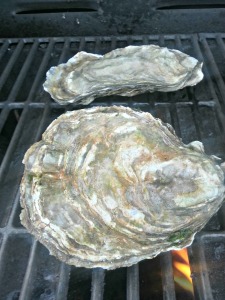 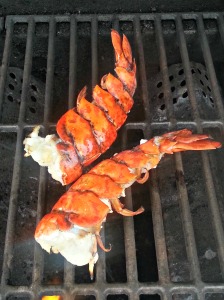 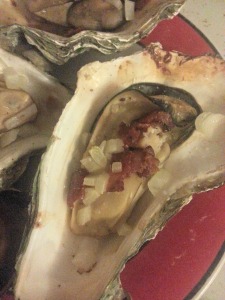 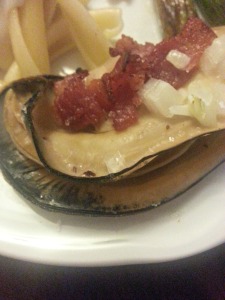 And the verdict? The lobster wasn’t bad. We actually took the meat out of the tail after cooking it and turned it into an Alfredo sauce over pasta. It was fine. I think that we just need more practice cooking lobster in order to really get it right.

Oh, the oysters. I thought the lobster was going to be the really scary thing about this meal, but when we pulled those oysters out of their shells and got ready to eat them, ugh! We did try them and again they weren’t bad, but I think that we need more practice.

The big surprise in this whole thing was that our daughters just scarfed all of it and loved it. They didn’t blink an eye at how strange the seafood looked and just ate it. I think that just goes to show you that a lot of problems people have with food is learned.

Again, they give a few different choices for challenges, but this month I’m going with an easy one: “Slow Cooking! We live in a fast food world, but this month we’re asking you to slow things down, try out and share your slow cooked food recipes with us.”

I am really looking forward to this challenge! This month is so busy that I know I’m going to be using my slow cooker a lot. I have this slow cooker and I love it: Hamilton Beach 33969A Set ‘n Forget Programmable Slow Cooker, 6-Quart

What are your favorite slow cooker recipes?