Monday – From scratch orzo mac’n’cheese and salad. Hooray for Labor Day! Marquis will be home, so he is cooking. That means that “healthy” will probably not be the word of the day, but everyone needs an indulgence now and again, right? (That also means I’ll be eating lighter during the day in expectation, lots of fruits and veggies, probably just a salad for lunch.) We have some chipotle Gouda cheese that is yummy just to eat as is, but wow is it ever begging to be made into mac’n’cheese. We never, ever make mac’n’cheese from a box, can’t stand the taste of that powdery, yucky “cheese!” Instead Marquis will probably start with a couple of tablespoons of butter and melt that in a pan. He will then add about 2 tablespoons of flour and cook that for a few minutes until it starts to change color. Then he will add about 2 cups of milk and whisk that until it starts to thicken, and then take it off the heat and add the Gouda and probably a little cheddar to round it out. A little bit of salt and pepper, some bacon bits and then he will mix it with some cooked pasta and throw it in the oven for a little while. I’ll try to get an official recipe up sometime, but that gives you an idea.

Tuesday – Taco salad and cornbread. The last time that Marquis made chili we froze a bunch, so we will be putting some of that on top of lettuce and then top it all with tomatoes, avocados and whatever else looks yummy. Marquis will have corn chips with his, and I’ll probably just have some cornbread with mine. The cornbread will be made from this recipe.

Wednesday – Chicken wraps. Chicken is on a great deal this week, if you are in Utah go grab some from Smith’s, it’s $1.69 a pound! Great time to stock up and buy lots. When I do this I like to throw a whole bunch in the crockpot and let it cook for awhile and then shred it and freeze the shredded chicken. Throw a bag in the fridge the night before and it’s nicely thawed and ready to be thrown into a tortilla with some lettuce, tomatoes and some homemade guacamole. The guacamole is just mashed avocados, chopped green onions, diced tomatoes, and then cumin, garlic salt and pepper to taste. I like to have homemade tortillas in the freezer which I can throw in the fridge the night before so they are thawed. This whole meal takes about 5 minutes to throw together, and is great to wrap up and take on the go if needed.

Thursday – French onion soup. For those people that don’t like onions, I’m sorry that you are wrong. Someday hopefully you will come to see the light, and when it happens I bet it will be because of something truly amazing like this soup. I use the recipe from here, except instead of wine I just do more beef stock. For the baguette, I am going to try this recipe. For the real food purists out there, I know it contains mostly white flour, but if I tried using an entirely whole wheat loaf of French bread my husband would revolt, so we are still taking babysteps. This meal feels so fancy served in cute little ramekins with the cheese all melty on top! On the side we will have roasted cabbage. I know, I know, again, but we had a lot of cabbage! Plus, it’s just so yummy! We just chop it all up, toss it with some olive oil, salt and pepper and bake at 350 until it starts to get crispy bits, about 25-30 minutes. 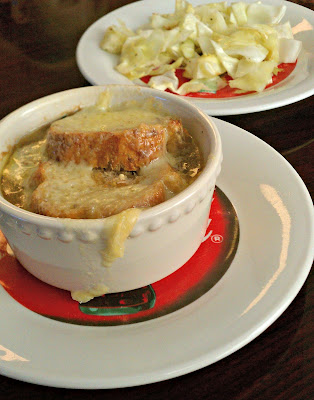 Friday – Grilled chicken, grilled zucchini and grilled corn on the cob. I love using the grill! It’s so fast, easy, yummy, and lots few dishes to clean up! We will probably season the chicken with whatever seasonings smell best from the spice cupboard that day.

Saturday – Chicken enchiladas and salad. At the end of this month we will have a whole lot going on and will have less time than normal, so for the next few weeks I’m going to try to make at least one meal a week that I can also freeze a bunch. I want to be super prepared so we don’t start eating out or calling for pizza! Chicken enchiladas freeze so well that they just had to be on the list. I use the tortillas from here and I will probably make a ton extra and make sure the freezer is well stocked with tortillas. The enchilada recipe I like to use ishere. You might recognize it because I use the sauce all the time for other things, it’s just so yummy! I’ll probably make a bunch extra of the sauce to freeze, too.

Sunday – Spinach fettuccine and steamed broccoli. This recipe is from the Cooking Light Comfort Food cookbook. I tried to find it online and couldn’t, but basically it uses cream cheese to make it creamy, while still using the Parmesan to make it rich and yummy. There are also a few real bacon bits and some spinach. The recipe calls for frozen spinach, but there was an unfortunate incident in our house several years ago involving a bag of frozen spinach and a luckless beetle that had apparently suffered the fate of freezing to death, and then was very nearly eaten by me. And so now we only buy fresh spinach. On the side I’ll steam some broccoli in our steamer, and then toss it with some butter and salt and pepper.