Skip to content
January 28, 2012 Emily Leave a comment
I don’t usually post on Saturdays, but I personally hate cliffhangers so I am not going to wait. Plus, what in the world do some new exercise DVDs have to do with giving up Dt. Coke? I know you are wondering, right?
Like I said in the last post, my weight had plateaued, I was super bored with the DVDs I had been doing on and off for the past five years, and I was looking for something new and more challenging. One day I was feeding my other addiction, people.com (don’t judge), and I read how Kate Hudson had lost all her baby weight using the Tracy Anderson Method (hereafter lovingly referred to as TAM). I was curious and work was super slow, and so I started googling. After all my reading I was now more than curious, I was intrigued! I was ready to order, except that I really didn’t want to spend the $29 a month (it’s 3 payments of $29 each for the 90 day program with shipping added to the first payment, and then after that you can keep paying $29 a month for additional DVDs if you want). I kept coming back to it over the next few days, though, watching the little promo over and over and reading all the reviews. In my reading, I found out that there is a diet plan to go along with the DVDs, and that diet plan does not include soda of any kind, not even my beloved Dt. Coke. As I thought about it and did a little math, I realized that we were spending a very embarrassing $40 a month on Dt. Coke. The most embarrassing part about that is that we were buying them on the super good sales and stocking up. Wow, just wow, that is a lot of Dt. Coke! But if I was doing the new diet plan, that would free up plenty of money to pay for the DVDs. I started slowly weaning myself off with the gigantic amount I had in storage (it was seriously beyond ridiculous, guys) and I ordered TAM. 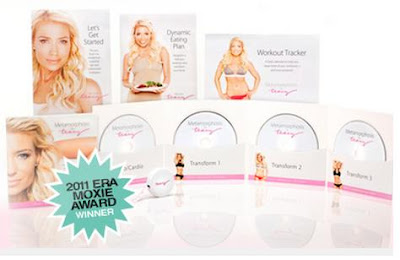 So there is the story, and here is what I love about it. First, I wanted something more challenging. Ha ha, um, yeah, I would definitely describe this as challenging! I’m pouring sweat by the time I’m done, it’s great! This is more than just a set of DVDs, this is meant to be an entire lifestyle change, staring with some super fast results. She asks you to work out six days a week, and to do both her half hour cardio DVD and half hour muscle work DVD every single day. For a lot of people, that is a lot, but I was already working out five days a week for an hour each day, so adding one more day was not much to ask. Plus, I have discovered that in order for me to be the best mom/wife/employee/friend/all around happy person that I can be, I NEED to exercise. I was resting on Saturdays and Sundays, and I could tell that by the end of the day on Sundays I was getting fidgety and grumpy. I needed my exercise fix! Adding a workout on Saturday fixes that problem, no sweat. Or actually quite a bit of sweat. The cardio is dance cardio. Have you ever seen me dance? No? There is a big reason for that, I’m probably the world’s most terrible dancer, but this one was fairly easy to follow and I’m getting so I’m not half bad at it. The “muscular structure” part is the part that I both love and hate at the same time. Tracy works the accessory muscles instead of the big muscles, which translates into using the muscles you haven’t really used much and probably didn’t know you had. This part of the workout changes every 10 days, which I love! That takes care of my problem of getting bored. I am on day two of the second level and I can already tell that things are changing and moving around.  Plus I’m down three pounds already!

I have to add the disclaimer that after all that, after giving up Dt. Coke so I could follow the diet plan, I’m not actually doing it. Diets and nursing babies don’t mix, so for the next little while until I wean Princess I’m doing something completely different for food, which I will talk about later because this is already yet another very long, very wordy post.
Here is what I have learned so far. First, her music, well, it sucks. I think she knows it, though, because there is an option to watch the DVDs without the music, and she provides playlists on her websites you can listen to instead or you can make your own. Lately I’ve just been turning on the dance cardio Pandora station, which works great! It also seems to be easier if I count out the reps as she is doing the leg lifts so I know how many I have left and it doesn’t just seem like she is just going on forever and ever and ever. I also think I am going to get her book (it’s here) because she goes more in depth into her method there and I’d love to learn more.
As a sum up, this is not, not easy, but I still love it and I can’t wait to see what happens with the rest of my 90 days! I was thinking of doing a weekly recap, both as an accountability thing for me and for those reading this who might be interested, what do you think?