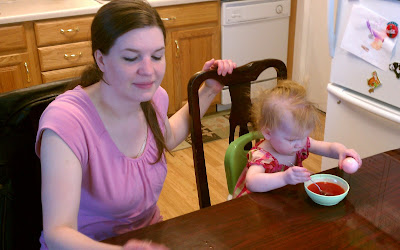 This picture doesn’t look like your normal “Look how much weight I’m losing” picture. But I don’t have one of those this week and this is what I do have, so I’m going to share it and tell you what I see in this picture. First, I see a skinny face. I can’t believe how much different my face looks from just a few months ago, I can see I’ve had a lot of weight loss just looking from the neck up. I also see skinny arms. My bat wings are going away! They aren’t completely gone, but definitely disappearing! I see a girl who isn’t hiding behind the camera, who instead is having fun getting down and dirty with her girls. I also see a future blog post about Easter egg decorating!

Earlier this week my sister asked me this question, “Would you attribute your weight loss success to TAM, or do you think anything would have worked if you had just done it?”
I’ve been thinking a lot about this. I think the last words are the key, “if you had just done it.” When I started TAM I had been losing some weight doing yoga and Pilates mixed with Turbo Jam. Turbo Jam is a great workout and I would recommend it to anyone. It’s just fun, and Chalene Johnson, the instructor/inventor is peppy and motivating. She is still a person I really look up to. But. I had been using the same DVDs for years and was really, really bored. Chalene has a bunch of other DVDs out there and I was a click away from buying her Turbo Fire program when I found TAM. The reason I chose TAM over Turbo Fire all comes down to abs.
I tried to find a picture that would do it justice, but it really works better if you see it in action, so here is a little clip from Turbo Jam.
Again, really fun, and I would still recommend these DVDs. But did you see their abs? For a long time I had the idea that there were two choices, you could have fat abs, or you could have a six-pack. Granted, I would much rather have a six-pack than fat, but I really don’t think a stomach that defined is pretty on a woman. Why can’t my stomach just be flat?
With TAM, you are working your muscles every day, but not the big muscle groups. Instead it’s the accessory muscles, the smaller ones you never use, but that pulls everything in and makes you lean and toned without ugly mannish muscles. Hooray for a flat stomach!
I also love how TAM is customized to my body type, and that the workout changes every ten days, which keeps me from being bored and keeps my body changing. I signed up for the Continuity program when I bought the original Metamorphosis, and my next DVDs should be shipping soon. I will keep getting new DVDs until I tell them to stop sending them, and I love that I don’t even have to think about what I will be doing, it’s just all laid out for me!
So that was a long answer, but the short answer is this. Yes, maybe I could have had as much success with a different program. But I have been losing weight twice as fast with TAM, it is built to keep me from getting bored, and the shape my muscles will end up  in the end is the shape I prefer. So what’s not to love?
And with that, I am happy to tell you that I have lost another 2 pounds this week, despite Hobbit Sunday and the best egg-free birthday cake recipe I have tried yet (another future blog post). I also finished Level 7 yesterday and took my measurements, and I lost half an inch from each part of my body, chest, waist, hips, each thigh and each arm. That’s 3-1/2 inches total off my body in 10 days! My new pants I just bought about 2 weeks ago are already getting loose, and they were tight when I bought them.
And that is why I like TAM best!
To find out more about TAM, read the rest of my updates here, or go check out the Tracy Anderson website here.  The people at TAM haven’t give me anything to talk about them, I just like to blab about the things I like.